With the quality and freshness of our ingredients and our friendly and fast service, we please our guests over and over again.

The legendary Pan Pizza made us famous but you can also enjoy in our restaurants, such as the thin-crust Italian Style, the Cheezy Crust with delicious cheese baked in the crust and tasty pasta dishes and salads.

The History of Pizza Hut 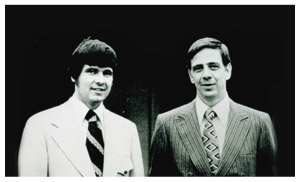 Two brothers from Kansas founded Pizza Hut in 1958. The $600 start-up money was borrowed from their mother, the equipment was secondhand and the furnishings of the restaurant, which was located at a busy crossroads at the center of Wichita, Kansas, were very modest, But brothers Frank and Dan Carney hit a bull's eye in 1958 when they opened their first pizza restaurant, which they called “Pizza Hut”, referring to the rather inconspicuous building. Today, more than 50 years later, there are more than 13,000 Pizza Huts in over 100 countries worldwide. A success story that is proof of the good hunch of the two brothers, college students at the time, who followed up on a suggestion made by a friend of the family and believed in a gastronomy concept still relatively unknown in America at that time. 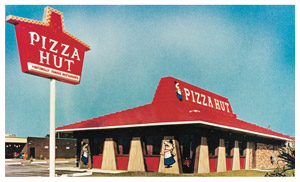 It wasn’t long before Pizza Hut became a registered trademark and the first franchisees were found. Only ten years after the grand opening in Wichita, more than one million guests had been welcomed in 310 restaurants and with a first branch in Canada, the conquest of the international market had begun. A little later, in 1969, the red roof was introduced as the company logo, which was soon to become world famous as an easily recognized guarantee of crispy pizza, delicious pasta and friendly service in a pleasant atmosphere.

Pizza Hut had long been offering other products such as pasta in addition to pizza by the time it went public in 1972. The 1000th restaurant was opened in the same year ‒ in Wichita, of course. This rapid expansion continued.

After opening new restaurants in Japan and England, the 100th international restaurant began operations in Australia in 1976. This brought the total number of restaurants to 2000. After the shareholders approved the takeover by Pepsico Inc., the steady upwards trend continued uninterrupted. In 1977, the opening of the 3000th restaurant in the USA (in Texas) was celebrated. In 1980, Pan Pizzas with individually selected toppings were introduced worldwide in all Pizza Hut restaurants. Today they are an absolute classic and they will undoubtedly remain that way.

By the time the 30th anniversary was being celebrated, the company had more than 6000 restaurants and Express Stores around the world. The year 1989 went into the annals as a very special year. For the first time in its history, Pizza Hut delivered to the White House in Washington, DC. Then-first lady Barbara Bush had placed the order. She was entertaining 200 children from Washington as part of a charity event.

The triumphal march of the pizza was not to be stopped – neither in America nor anywhere in the world. For example, in the course of Super Bowl Sunday in 1990, Americans consumed more than 1.3 million Pizza Hut pizzas. This amounts to 7000 pizza sales per minute. That same year, the company’s sales figures reached the $4 billion mark.

Pizza Hut is aware that success comes with responsibility and proved this in 1992 after the devastating hurricane in Florida, when 120,000 meals were distributed free of charge to volunteer helpers and to people who had lost their homes

Soccer legend Pelé was present when the 10,000th Pizza Hut restaurant was officially opened in São Paulo, Brazil in 1994. In the same year, the restaurant in Beirut was able to restart operations after being closed during the Gulf War.

For the first time ever in its history, Pizza Hut went on the offensive in 1996 with a television commercial during transmission of the Super Bowl – and it was immensely successful: Americans devoured 12 million pizzas during the television transmission of the football highlights and a grand total of 30 percent of those were delivered by Pizza Hut.

1997 brought a change of ownership. From 1992 on, Pizza Hut, which had come to Germany as Pepsico Food Services in 1983, had belonged completely to Pepsico after termination of a joint venture with Tengelmann. However, in October 1997, Tricon Global Restaurants Inc. was spun off into an independent, stock market-listed company with restaurant partners Pizza Hut, Kentucky Fried Chicken and Taco Bell. In March 2002, after the acquisition of the brands Long John Silver’s and A&W, the American company began doing business under the name of Yum! Brands, Inc . Total sales for the company in 2010 reached 11 billion US dollars.

Staying true to our principles

Naturally, in the course of the company’s 60-year history, there have been many changes in the pizza business. Much of Pizza Hut’s continued success is based on the fact that it has never deviated from its original principles: quality, characterized by freshness and first-class products, and courteous, friendly service that makes the customer feel like royalty.